I’ve been asked to open for a great husband and wife duo called  Pocket Vinyl;  he plays a “ben folds five” piano-styling while she starts with a blank canvas and just paints. They auction off the paintings at the end…

Working a setlist and I thought I’d compliment their originals with some of mine, including my GlumPuppet videos showcasing my “wickedly funny”-style songs, and maybe toss in a few “hauntingly beautifuls,” like If You’d Call My Name. 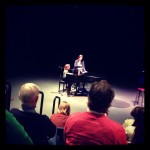 Today I participated in a wonderful vocal master class at The Warner Theatre taught by singer & recording artist (and Broadway legend), Linda Eder. I think she is an amazingly versatile vocalist who I admire, not only for her voice, but that she’s made a career recording in multiple styles and has done well. She’s also got a similar taste for song styles. I found her to be very personable and kind, and an intuitive vocal teacher.

I’m posting from Cloud 9 right now, because she said she’d love to see me perform!
I brought in the Willie Nelson hit, “Always On My Mind,” and performed it as a slow ballad. I guess I chose not to bring in a Broadway tune as everyone else did, because after reviewing the songs Linda has recorded, somehow I thought that would resonate on the same wavelength (if that makes sense). Maybe I could harmonize with her. Anyway, I’d love to write a song like that for her to record, so I guess I’d better get crackin’.