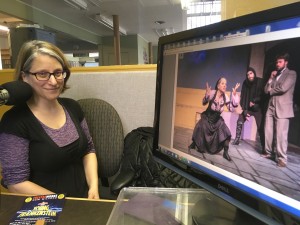 “(Lana’s) songs alternate between hauntingly beautiful to deliciously wicked and comic. (At) Her first performance for Hi5netTv’s First Thursdays both the audience and the cameras went wild.” ~Douglas Bibbey, co-founder of Hi5netTV, producer of First Thursdays

“Lana Peck is one of the funniest, most creative and talented people I’ve ever met. Her videos are unique, inventive and totally enjoyable. She always does something new and unexpected, not easy to do these days. I hope sometime she will receive the widespread recognition and the breaks that she deserves because she’s that good. “~ Kathy Moran, SummerSongs Songwriter

“I was so impressed with the tenderly accurate performance of Lana Peck (GENTLEMAN’S GUIDE at the Warner, YOUNG FRANKENSTEIN at TheatreWorks New Milford) in the role of Helen’s mother, Kate Keller. She was able to make the most of this supporting role with another fine dramatic performance. Ms. Peck, who appears in her third production of the play, dedicated this excellent performance to the memory of John Fabbri, who played her father Capt. Keller when she took on the role of Helen.”~Nancy Sasso Janis, New Milford Patch

“Lana, Thank you so much for everything you’ve done for this crazy production. Your Frau Blücher is impeccable. The first time I saw this show, I nearly forgot that Frau Blücher was in it. You’ve established this character as the one we anxiously wait to enter the scene.” ~Jocelyn Beard, Director of Young Frankenstein at TheatreWorks New Milford/Dramatists Guild Playwright. JocelynBeardSpookyMama.blog

“Lana Peck as Frau Blücher not only nails the role, but has a spontaneous sense of comic seriousness.” ~ Kevin T. McEneaney, The Millbrook Independent

“Lana Peck, as the tightly woven Frau Blücher, a hangover domestic in the castle, is a hoot. Her rendition of ‘He Vas My Boyfriend’ was delivered so earnestly during a recent performance, the audience roared with laughter.” ~Elizabeth Young, The Newtown Bee

“Lana Peck’s Frau Blücher brings the house down when she sings ‘He Vas My Boyfriend’ about her rocky relationship with the deceased Dr. Frankenstein.” ~Leon Graham, TriCorner News, Lakeville Journal

“As Inspector Harriet Goring, Lana Peck offers yet another sparkling, effervescent performance that is witty, crazy, hammy, dizzying and chock full of the comic snap, crackle and pop that the actress does best. Here, as in the recent “And Then There Were None” where Peck played Mrs. Ethel Rogers to the height of sheer perfection, the actress is at the top of her game.
What’s especially fun about Peck is that she never gives the same performance twice. That’s why directors always cast her in their productions. She has extraordinary insight and range. She know how to take a line of dialogue and make it her own. And she’s not afraid to take chances. Here, she plays her super sleuth female detective character boldly and wisely, using broad, comic stokes and colors that are exactly right for this sort of comic mayhem. She also knows how to amp and ham it up whenever Guttadauro asks her to do. And when she’s center stage with the spotlight shining bright, Peck goes for broke and delights her audience at every comic turn.” James Ruocco

“In the role of Ethel Rogers, the caretaker who was brought to Soldier Island to cook and care for the invited houseguests, Lana Peck is so unbelievably English, you’d swear she was plucked from an important BBC One drama and flown over to America on British Airways (first class, of course) to appear in Beard’s murder mystery.” ~ James V.  Ruocco review of Agatha Christie’s “And Then There Were None” at Warner Theatre

“Peck may be little, but she has the pipes of an opera singer with a wide range. And she proved she can sing high vibrato and hold a note in her “By Strauss”/”Sweet and Lowdown” voice battle with Cookie. She also had one of the funniest songs of the show when her stern, dry character accidentally becomes drunk.” ~J. Sawyer, EntertainmentCONNeCT

“Lana Peck as the no-nonsense, no-liquor Duchess hits notes so high she nearly stops the show.” ~ Joanne Greco Rochman, Waterbury Rebublican review of Nice Work If You Can Get It at Warner Theater

“Though she invariably plays small roles, Lana Peck never disappoints, and her portrayal of Grandma Tzeitel in the dream sequence is no exception. One day, a sharp-eyed director will recognize that Peck’s acting talents are as fine as her sweet voice, and will award her a well-deserved major role.”
~ Jack Sheedy, The Register-Citizen

The new musical, “The Gefilte Fish Chronicles,” just ended its debut run at the Warner Theatre. Among the cast members who took their final bows was Torrington native and current resident Lana Peck, who brought her own Jewish background to the show.

“Gefilte Fish Chronicles” is filled with wonderful music and lyrics, rivaling the best of Broadway. Listening to Lana Peck as Young Rebecca, sing, “It’s Time to Live My Dream” in her silvery voice made us smile and the audience applaud loudly. And with her comic genius, she also stole the wedding scene as stumbling, half-blind, “older-than-dirt” Rabbi Epstein. Peck is a professional who always stands out and it is our good luck that she is in this show.” ~ Jack Sheedy & Jean Sands, The Register-Citizen

“There were a few outstanding performances [in the musical Curtains], but unfortunately the best performance of all involved the comedic genius of Lana Peck as Jessica, whose character dies five minutes into the show.” ~ Jack Sheedy, The Register-Citizen 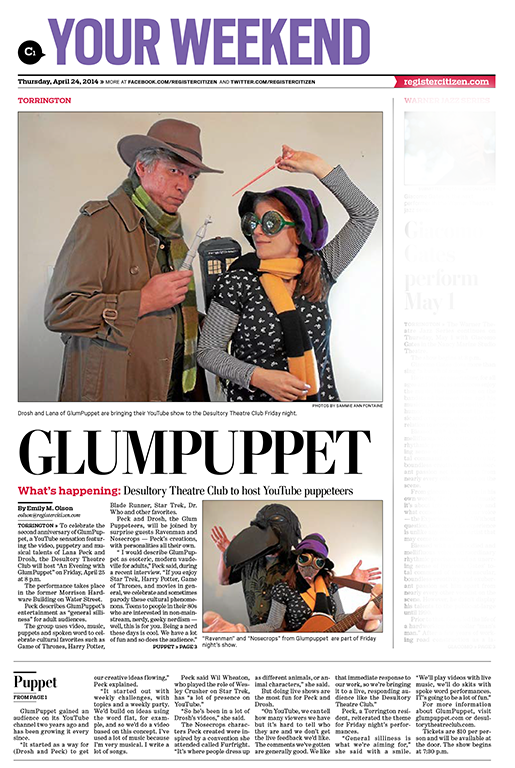