I am playing Inspector Harriet Goring in Warner Theatre’s production of Ken Ludwig’s The Game’s Afoot (Holmes for the Holidays) through December 17th. Directed by Joe Guttadauro (who you may recognize as my love interest in Nice Work If You Can Get It), and I am joined by two of my And Then There Were None co-stars (Thursday Savage and Mike Zizka). We just “rolled over” into the comedic side of murder!

“As Inspector Harriet Goring, Lana Peck offers yet another sparkling, effervescent performance that is witty, crazy, hammy, dizzying and chock full of the comic snap, crackle and pop that the actress does best. Here, as in the recent “And Then There Were None” where Peck played Mrs. Ethel Rogers to the height of sheer perfection, the actress is at the top of her game.
What’s especially fun about Peck is that she never gives the same performance twice. That’s why directors always cast her in their productions. She has extraordinary insight and range. She know how to take a line of dialogue and make it her own. And she’s not afraid to take chances. Here, she plays her super sleuth female detective character boldly and wisely, using broad, comic stokes and colors that are exactly right for this sort of comic mayhem. She also knows how to amp and ham it up whenever Guttadauro asks her to do. And when she’s center stage with the spotlight shining bright, Peck goes for broke and delights her audience at every comic turn.”  ~James Ruocco 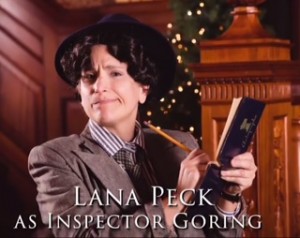 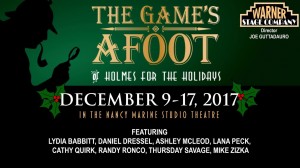 Below is a production photo (by Mandi Martini) showcasing the Inspector’s flare for over-the-top Shakespearean acting! Also shown is the talented, Randy Ronco as William Gillette: 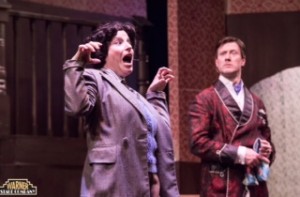 For tickets go to: WarnerTheatre.org